Moles and gophers are the nemeses of every Portland homeowner’s hard work in having that beautiful yard. There’s nothing worse than looking out over your lawn, and there it is, a massive mound of dirt left from a mole that decided to make a home in your yard. Even though moles and gophers can both be the downfall of a beautiful landscape, they are two very different animals. Gophers are types of rodents, whereas moles belong to the shrew family. Gophers are bigger, have smalle eyes and ears, and have external cheek pouches to carry food. Moles are smaller, generally have dark black, soft fur, and their eyes and ears are so little they often appear not to have any. Moles also have very large paddle-shaped paws with long claws for digging and snout with small teeth, whereas gophers have little paws and large front teeth. Identifying whether gophers or moles are present will aid in quicker and more effective pest control. 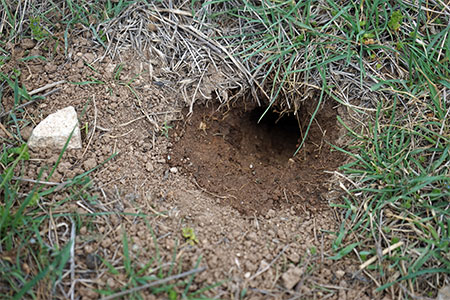 One of the easiest ways to determine whether your lawn has gophers or moles is by inspecting the mounds of dirt around your property. Gophers create underground tunnel systems that they use to travel without being exposed to larger prey. Gophers will create many surface holes for them to peek out of in search of food, the multiple access points allow them to forage for vegetation, store it in their cheek pouches, and quickly return to the tunnels.

Gopher holes are easy to identify. When you look at the mound of dirt in your lawn, and you notice that one side of the pile is much higher than the other and it has a crescent shape to it, you can be confident that it is a gopher hole.

Moles live underground and feed on worms, grubs, and other insects found in the soil. Because they live underground, you might not see as many mole entrances as you would gopher holes. But you will see molehills. Because their food source lives in the top layer of soil, they will dig tunnels just below the surface, which will be noticeable. Molehill entrances are dome-shaped like a little volcano, and the dirt is generally richer and smaller than the soil dug up by gophers.

Gophers and moles both cause damage but in different ways. Because gophers dig their tunnels deeper and create numerous holes, not only do they destroy the look of the property, but they can also chew through cables, piping, and plant roots, causing a lot of problems. Moles don’t dig very deep into the soil, but their tunnel systems that run along just below the surface will destroy the property, not to mention that their underground activity can wreak havoc on your plant life. Moles will dig through the roots of plants, stunting their growth and affecting the look of your plant life.

How To Get Rid Of Gophers And Moles

There are several ways to get rid of gophers and moles. Many people believe in DIY methods, including blaring loud music, deterring plants, poisons, traps, and many others. But at The Killers Pest Control, we have a safe and effective method that will rid your property of gophers and moles! We are proud to now offer BurrowRX treatments to smoke out moles and gophers where they live. No matter how far down in the ground, the BurrowRX treatment will smoke them out. The best benefit of our approach is the safety of pets and children. There are no dangerous traps or baits that children, pets, and non-target animals access. Some states have banned the use of traps for moles and gophers, so that’s where our treatments come into compliance with new state laws and regulations like in Washington State.

The carbon monoxide smoke we use is not a poison that children and pets can ingest. We use a smoke indicator that lets us see where the smoke is traveling, quickly identifying any other entrances that need to be covered up. One of the best parts about this method is there is nothing to clean up. With traps, the dead gophers and moles need to be removed and disposed of, but with our process, the carcasses remain underground and decompose naturally. The carbon monoxide smoke will not affect any fruits or vegetables growing in your yard. The BurrowRX treatment is quick, effective, and safe for your family and property.

With The Killers Pest Control, we design our treatments for moles and gophers to eliminate and stop them from doing damage to your lawn, flower beds, and plants. Moles and gophers are voracious feeders that tunnel to search for ants, earthworms, and any other grubs they may find in the ground around your home to eat. It’s time to stop their reign of terror in your yard. Our technicians have years of experience dealing with all kinds of pests in the Portland area, including gophers and moles. The new treatment and technology that we use only make our services more useful and reliable. If you have gophers or moles on your property, call The Killers Pest Control today! We also provide a variety of other pest control services including bee removal, bed bug treatment, and termite control!