Removing Boxelder Bugs from your Home 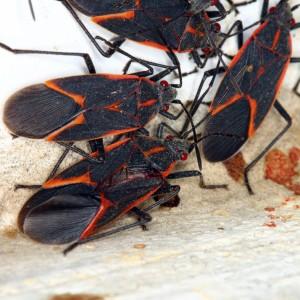 Boxelder bugs are most commonly active in spring and fall. They spent the winter hibernating in the crevices of your home and then appear like a plague one warm, sunny day. Boxelder bugs are identifiable by the red or orange markings on the top of their wings. When they do appear, they are everywhere! When you see the first sign of these prolific critters, it is time to call The Killers for boxelder bug removal in Beaverton and the surrounding areas.

The sudden boxelder bug infiltration is due to their hunt for a nice home during the cold season. In summer, they tend to go far from houses and other buildings as they find food in wooded areas. Homes with a severe outbreak or that are in a wooded area may experience these insects during the summer as well as spring and fall.

While boxelders will not harm your home, they are a nuisance due to their sheer numbers. They are also notoriously tricky to get rid of, so when you see one, calling sooner than later is best. Our boxelder bug removal not only takes care of those bugs that you see, we also get into the crevices where they like to hide out from the cold. Our professionals offer thorough boxelder bug removal that lasts through the year—guaranteed!

Our boxelder bug removal professionals in Beaverton start by spraying the outside of your home or office. This is the best place to get rid of them—before they get in. From there, we treat the attic of your building, as this is a favorite wintering space. We also spray a large space around the perimeter of the building, as this will make it impossible for them to forage on plants and bark dust nearby, a major staple for those going into or coming out of their winter hideout.

A treatment in the spring and one in the fall is generally enough for effective boxelder elder bug removal. In particularly heavy infestations, it may be necessary to treat additional times.

Our experienced boxelder removal team knows where to look for and how to identify all stages of boxelder bugs, including the eggs and nymph stages. Our products and methods get at the heart of where the boxelder bug hides, making it impossible for them to multiply. Our boxelder bug removal in Beaverton comes with a one-year warranty, so you can be certain the situation is under control!

Having proudly served Oregon since 1982, we offer experience and understanding of pests in the Northwest. You can count on us to accurately identify which pests you have and to be able to treat specific insects with targeted, effective treatment.

When you call us for boxelder bug removal, we come out for a free inspection. We can let you know the severity of the problem as well as what other insects you may be dealing with.

We provide our pest control services in a variety of other locations. When you need pest control in Milwaukie, Portland, Canby, Newport, Corvallis, or anywhere in between we are here to help!

See also our services in Beaverton for:

Contact us today for your boxelder bug removal in Beaverton or the surrounding areas.

At The Killers we also offer boxelder bug removal in:
Portland