Types Of Bees And How To Deal With Them

Types Of Bees And How To Deal With Them
Posted on August 2nd, 2019 by Killers-admin

It is important to note that not all bees are are harmful. The majority of bees in the Pacific Northwest are pollinators and worker bees. They’re job is to pollinate all the flowers, fruits and vegetables that grow in the area. While wasps are in the same family as bees but are very different. Generally they do not contribute to pollination and they are prone to stinging, especially if they feel that their nest is being threatened. Which puts a lot of homeowners in a difficult situation when wasps build their nests on or near their home. Removing bees should not be done by anyone without the proper training and equipment. The stings from wasps can be very painful and cause other wasps to attack. The general rule of thumb when dealing with bees is if they aren’t bothered, they won’t bother anyone. Always call a pest control Portland exterminator when experiencing a bee problem.

These bees are not harmful and are the major pollinators for a lot of agricultural crops. Honeybees will only sting if they absolutely have to because when they sting, they die. Their stinger is attached to the rest of their internal vitals causing every sting to be fatal, to them. Honeybees are not a threat to people and generally do not need to be removed. But if there is a nest that is too close for comfort, call a professional beekeeper or bee removal specialist.

These bees are the cute, fluffy, yellow ones that fly around in the summer time. They are also very big pollinators and make the humming sound when they fly by. And similar to honeybees, bumblebees rarely sting unless handled or threatened. Their colonies are relatively small and are rarely a nuisance. It is best to avoid killing these bees because the population of pollinating bees is on a steady decline. But if the removal of these bees is absolutely necessary, calling a beekeeper or professional bee remover is the best option.

These are also another pollinating bee. Although they do drill holes into wood which is a main reason that people want them removed from their property. As far as stinging is concerned for this species of bees, only the females can sting and only do in self defense. The male carpenter bees tend to be more aggressive but are unable to sting. Most bees can be left alone and won’t bother anyone. But if the concern for the wood on a house is an issue there are solutions for that. Painting and sealing the wood will help prevent carpenter bees from nesting. If there is always a nest formed there are home remedies to remove the bees. Loud music is extremely irritating to these bees and will cause them to leave if it is played near their nest. Or a citrus spray made with boiled fruit slices sprayed near their nest. These are both good ways to evict carpenter bees. If there is a larger population of them it would be wise to call a beekeeper for professional; bee remover.

There are many other types of bees and all of them are docile and helpful to the environment. Generally most bees do not require removal but if they do always have it done by a professional. This not only protects the bees but it protects other people from getting stung. 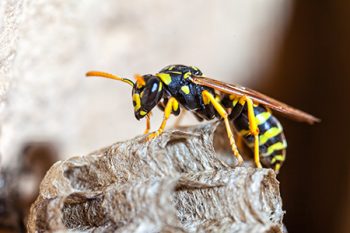 Wasps and bees are very different. Wasps generally don’t help with pollination and are more aggressive in defending their nests. If any of these types of wasps or their nests are present, they should be safely, and professionally removed. Trying to remove a wasps nest of any species is extremely dangerous.

This type of wasp can pollinate but are not very effective especially since they generally eat other insects. Hornets can be extremely aggressive, especially if someone is too close to their nest. Hornet stings can be extremely painful and cause allergic reactions. Killing hornets is seriously not recommended, not only because it is a terrible idea but also when a hornet is killed it releases a pheromone that alerts the other hornets in the colony that one of them just died. This causes an entire colony of hornets to become extremely aggressive. It is not recommended to remove a hornet nest alone. Always call a professional.

These types of wasps are also not known for their pollinating skills because they eat mainly other insects. Yellow jackets have a tendency to be aggressive and they have a dangerous stinger that allows them to sting a victim multiple times. Their stings are quite painful and can hurt for quite a while. Because these wasps are meat eaters it is a good idea to keep any food covered or put away, especially in the summer time. Yellow jackets tend to be more present during the summer months when everyone is having BBQ’s and cooking up all kinds of delicious food that yellow jackets are interested in. The best way to get rid of a yellow jacket nest is to call a professional and leave it to them.

Because there are different types of bees and wasps, there are different methods for removing them. In general most bees can be left alone without any issues arising. There are circumstances where bees need to be removed; if someone has a bee allergy, if they are in an unsafe location or if they become too much of a nuisance. The first step to bee removal is locating the nest. If there is an increase in bees, try to locate the nest in order to help out the bee removal specialist before they arrive. There are many methods that can be used to repel bees and are generally safe techniques. But wasps are an entirely different matter and should only be handled by professionals. Call The Killers right away if you have a wasp problem. Our team has the proper equipment and training to handle any size hornet, yellow jacket or other wasp nest that needs to be removed. For pest control Portland, call The Killers!