How to Get Wasps Under Control: From an Exterminator

How to Get Wasps Under Control: From an Exterminator
Posted on September 6th, 2018 by Killers-admin

How to Get Wasps Under Control 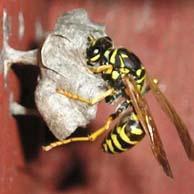 Before you call an exterminator, figure out how it’s possible to get wasps under control. Gutters, soffits, and eaves on house exteriors are popular nesting spots for wasps. Plant life and flowers attract them to lawns, as will patios and additional outside eating spaces with sticky soda spills or crumbs which aren’t cleaned up. Trash cans which aren’t correctly covered and consistently emptied additionally attract wasps which are seeking food sources. Properties that have abundant spiders and insects offer sufficient prey for both mature and developing wasps. Nests that are left behind by wasp populations which expire during the cool weather seasons generally aren’t reused by new generations of wasps.

Wasps: How serious are they?

Wasps close to the house may destroy outside activities and make working in the yard challenging. While they seldom go out of their way to sting humans, wasps might become hostile if disturbed or threatened. A wasp’s sting is painful yet generally non-threatening to the ones without allergies to a wasp’s venom.

How to Eliminate Wasps

An exterminator utilizes an integrated approach which uses various efficient ways to control wasps. Their integrated program should include:

Signs are dependent upon species, yet oftentimes the workers and nests are the most likely indications.

In general, wasps come into our houses as a result of the following situations.

Wasp species are classified as solitary or social. As their name suggests, social wasps reside in colonies, which might number in the thousands. Inside the colonies, female workers do all duties inside the nest. Solitary wasps reside alone and thereby don’t have a colony. They will lay eggs, yet the eggs are left alone to hatch.

Some are predatory, while other wasps are parasitic. Predatory ones kill and eat other insects and other animals that they oftentimes give to their larvae.

Typically, parasitic wasps lay their eggs inside the bodies of living creatures such as spiders or caterpillars. The larvae eat the still-living host. They can help in the management of additional pests, especially in agriculture as a biological control agent. In addition, many wasps consume nectar from flowers and thereby function as a pollinator.

Some are aggressive species and may sting as threatened. Unlike a honey bee, a wasp oftentimes is able to sting several times.

Wasps: Do they all pollinate?

There are several wasp species that are critical pollinators. But, taken as a group, they do pollinate, yet aren’t as efficient at pollinating as bees. It’s mainly because bees possess hairier bodies than wasps; therefore, pollen will probably stick to the bee’s body and become transported from flower to flower.

Late within the summer season, the queen of a few species will generate unfertilized eggs. They’ll develop into males. These males fertilize the wasps which will become the queens of the next year. The fertilized females overwinter inside a sheltered area. In the majority of cases, the remainder of the colony perishes as winter arrives. The following spring the queen starts laying eggs. Fertilized eggs they produce become workers and build the nest and feed the larvae generated by the queen.

Learn More Today
5 Pests That Might Make You Sick
|
How do termites spread?